The Sony Xperia TL is the latest in a long line of attempts by Sony to create a phone that comfortably fits into an Android-dominated smartphone world. Since the company introduced Android with the Xperia X10, it has released an endless stream of devices that have been greeted with excited praise for their hardware capabilities and bitter disappointment for its software frustrations.

Every iteration of Sony's flagship device has been improved and been better than the previous version, but not a single attempt has been spot on. The Xperia TL, available now from AT&T, is as close as the company found the sweet spot for smartphones. But is that good enough to compete with other Android manufacturers with better track records? Is it good enough to compete with the best of Apple or Windows Phone 8 contestants?

James Bond seems to think so. The Sony Xperia TL receives a ton of product placement in the latest Bond flick, Skyfall, as the UK's biggest fictional spy undertakes secret missions to save the world and get the girl. If it's good enough for the world's Debonair spy, surely the Xperia TL is good enough for the average gentleman or lady, right? Read on to find out.

Regardless of what anyone could say about Sony's track record of providing timely firmware upgrades, the company can hardly be to blame for their hardware choices. Sony has a knack for making phones that look as amazing as they feel. The Sony Xperia TL is no exception to this feature. In fact, it's Exhibit A for anyone wanting to ensure that Sony is home to one of the best design teams in the phone industry. It makes sense that this is the "Bond phone," as the Xperia TL embodies several of the traits that define the Bond character: slim, nimble, strong, and handsome. The Sony Xperia TL is 9.35mm thin, but the phone feels even thinner due to a back curve found in the user's palm. The back of the device has rounded edges that suddenly stop and meet the inwardly sloping front edges of the phone. Aesthetically, the Xperia TL is a more imposing version of the Xperia Arc. The frame is 129.4 mm x 67.3 mm (5.09 in x 2.65 in) and feels tougher than its predecessor. The phone feels comfortable as the back has an aluminum coating that gives the phone an interesting texture that is neither smooth nor rough. The main part of the phone is made of anodized aluminum, which is more scratch-resistant and keeps the phone cool and comfortable to hold. 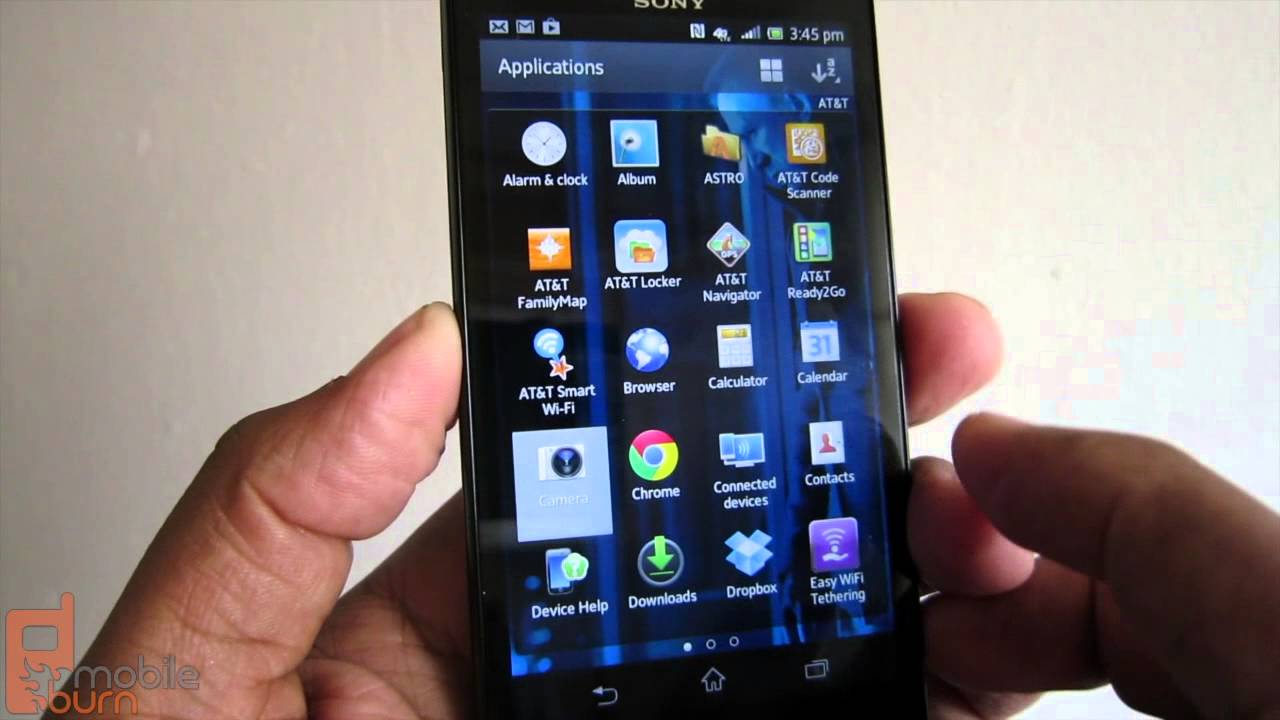 The Xperia TL is anchored above the anodized aluminum with a matt material as well as a striking 13-megapixel camera and an LED flash on the top of the device. Below the lightning bolt there is a circular outline that serves as a guide for the position of the phone when using the integrated NFC chip. Although Sony went for a Frankenstein-like mix of materials, the components complement each other rather than collide.

Unfortunately, the placement of the buttons makes less sense. The Xperia TL inexplicably has the power and volume buttons on the bottom of the phone so that the buttons are covered by the palm of the user's palm when in their normal position. Should someone who is right-handed feel the need to turn the volume up or down, that person would have to tilt the phone backwards and move awkwardly towards the volume buttons. Sony has also changed the position of the ports by adding an MHL-enabled USB charging port on the top left and slots for the SIM card and up to 32 GB microSD cards on the right. Sony could just as easily have placed these ports at the bottom to create more natural positions for the power buttons and volume buttons. The Xperia TL has a 4.55-inch LCD display with Sony's Mobile Bravia Engine. The resolution of 720 x 1280 is 323ppi, so the text is much smoother than on smaller displays. The Bravia Engine offers real-time adjustments to the color saturation and brightness settings for a more vivid display. For the most part, this works fine when browsing the gallery or viewing locally stored HD videos.

Bravia does not affect standard browsing, which is unfortunate as the screen appears too bright, almost like a white layer of low opacity is being laid over the screen. Unfortunately, the vibrancy and deep color displays managed in videos don't really provide any real benefit for the home screen or the standard apps. So, it wouldn't be a surprise if some users turned off Mobile Bravia and used the default display settings.

Sony offers buyers good news and bad news with the Xperia TL. The good news is that the phone looks amazing and has lots of great features. The bad news, however, is that sometimes the phone forgets that it is a premium device and it lacks these great features. A prime example of this tragic flaw is the version number of the software that comes with the Xperia TL – Android 4.0 Ice Cream Sandwich. Android 4.1 Jelly Bean may only be available on a fraction of Android devices, but there's really no reason for the Xperia TL not to help add that number, considering that Jelly Bean debuted five months before its release.

The Xperia TL suffers from the decision to run Android 4.0. Despite 1 GB of RAM and a statistically good 1.5 GHz dual-core processor, the lack of Android 4.1 buffering and speed optimizations make for a less impressive performance. Granted, we're discussing a millisecond difference, but there are other moments of slow switching between apps and random stuttering.

You can't help but wonder how much faster the transitions would be, or how fewer pauses there could be if the phone shipped with more recent software. Speed ​​differences aside, a lot of the great Jelly Bean features – not to mention the new enhancements made in the just released Android 4.2 – won't get onto this phone for several months, if they happen at all. Sony has not made any public statements regarding its intention to operate Jelly Bean, so consumers must judge the device for what it is.

As it stands, the Xperia TL is user-friendly and enjoyable despite its comparable shortcomings. The Xperia user interface has been made leaner and more adaptable, so that users can thematise the home screen or make clever adjustments to the standard Android software. Pressing the multitasking button opens a list of recently used apps that the user can swipe to close or tap to open. It also includes shortcuts to useful "little apps" that float over any open window and can be used without exiting an open app. The Xperia user interface supports the use of a calculator, timer, note, or voice recording via a browser or other app, enabling more powerful multitasking. Sony has built in the ability to add more small apps from the Play Store, so more tools may be added in the future.

Sony changed Android to have a bit more flair than the standard version of Android without adding as many glossy or flashy design changes as some other manufacturers have. The calendar is built into Facebook to show friends' birthdays and events, and has tabs that allow you to quickly switch between the Month, Week, and Day views. While Sony has beautified the calculator and messaging apps as well, the best posts are the standout alternatives for media apps. Album is a replacement gallery app that's quick and well organized, and groups pictures and videos by date. It also includes tabs for geotagged images. Online photos, including Facebook albums; and an editor that includes the standard Android 4.0 filters and effects.

Smart Connect can create some conditional operations such as: B. the Walkman app to start automatically when headphones are connected to the phone. This is also where users can manage SmartTags, Sony's custom NFC tags that can also be used to trigger actions on the phone. A SmartTag sticker can be programmed to vibrate when the Xperia TL is placed on it, or to turn on Bluetooth and GPS when the phone is placed on a dashboard. The tags, which are sold in packs of four in AT&T branches, offer an additional use of NFC beyond the mobile payments typical of the technology.

Phone calls on the Xperia TL aren't as crystal clear as some phones with enhanced audio, but there aren't any call quality issues. Both parties on the phone were clearly audible while testing the Xperia TL. The phone also accesses AT & T's 4G LTE or HSPA + networks in areas where both forms of 4G are available. Although AT & T's network was congested after Hurricane Sandy, the device consistently managed speeds of 10-14 Mbps downloads and 2.5-3 Mbps uploads. The availability and performance of LTE varies by market. The Sony Xperia TL is the latest in a long line of attempts by Sony to create a phone that comfortably fits into an Android-dominated smartphone world. Since the company introduced Android with the Xperia X10, it has released an endless stream of devices that have been greeted with excited […]