Last year, Samsung consolidated its position as the leading manufacturer of Android smartphones with the Galaxy S II. The massive success of this phone has helped make Samsung the largest cell phone manufacturer in the world.

However, things are different from last year as HTC has woken up from its slumber and released some really competitive and compelling smartphones. Samsung doesn't sit idly by while others expand their smartphone offerings, and its efforts to stay on top have resided in the Galaxy S III, a 4.8-inch powerhouse of a smartphone.

Is the Galaxy S III a worthy successor to the venerable Galaxy S II and does it help keep Samsung ahead of its competitors? In a word, yes. Aside from the fact that Samsung has managed to take an Apple-like step and bring out identical versions of the Galaxy S III with five US vendors, the Galaxy S III offers state-of-the-art hardware paired with useful software additions that allow it to Making smartphone buyers an attractive option for potential customers.

Note: This review was done on the AT&T and T-Mobile versions of the Galaxy S III, but the vast majority of it also applies to the Sprint, US Cellular, and Verizon Wireless models.

The Samsung Galaxy S III has a polarizing industrial design – some people will love it, others may hate it. The Galaxy S III is available in marble white or pebble blue and is Samsung through and through. This time around, Samsung has moved away from the square shape of the Galaxy S II and has returned to the rounded corners and softer lines that the original Galaxy S from 2010 had.

According to Samsung, the design (and software) of the phone was inspired by nature and is said to resemble a polished river stone. Apart from the elegant way of expression, the rounded shape of the S III helps to ensure that it lies comfortably in the hand and is comfortable to hold despite its relatively large dimensions. The Galaxy S III is exceptionally shiny, however, and because of this, it can be difficult to keep a grip on at times. As a result, during the review period, the phone slipped out of my hand more than once while trying to take pictures with the camera. The glossy finish is also prone to fingerprint collecting, which in my opinion no one really likes. 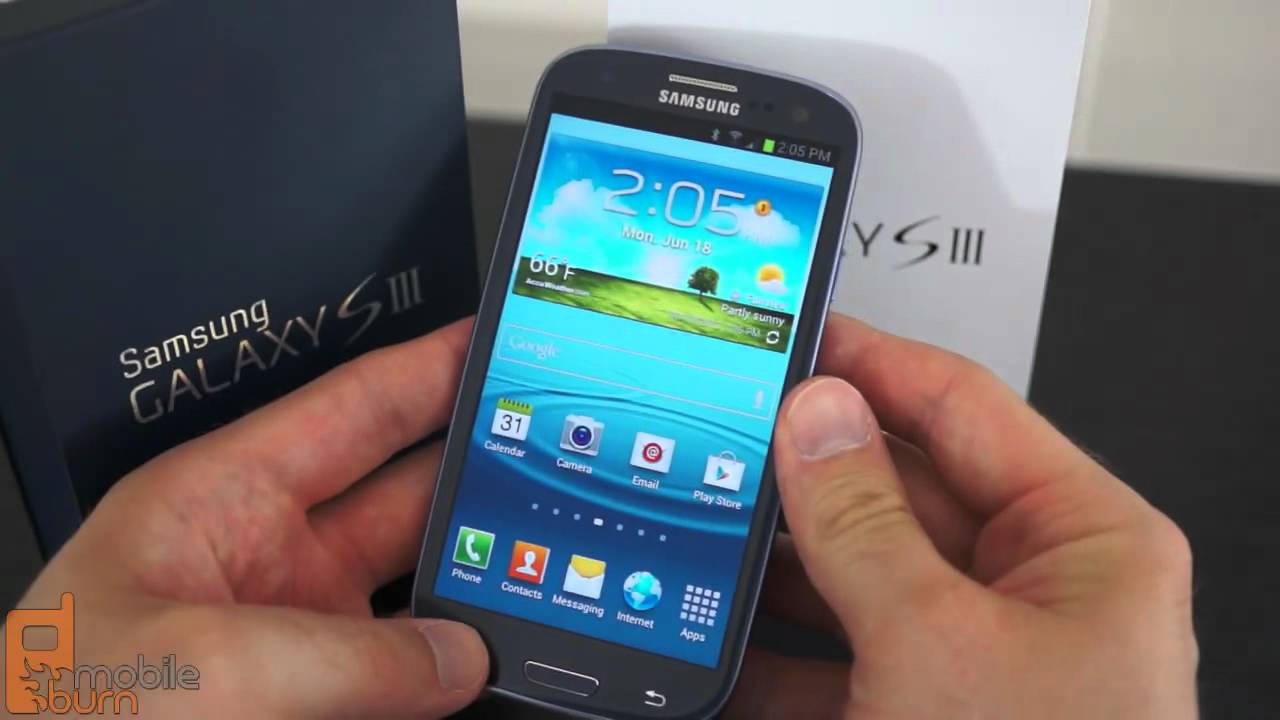 The Galaxy S III is not a small phone as it measures 136.6mm x 70.6mm x 8.6mm and weighs 133g. However, it is smaller in all dimensions than the Google Galaxy Nexus built by Samsung, although it has a larger display. Samsung says it put a lot of effort into shrinking the bezel and bezel around the display to give the Galaxy S III a smaller footprint, and I have to say the smaller bezel effect works. The Galaxy S III is one of the few oversized Android smartphones that most people can comfortably use with one hand.

The Galaxy S III display is a new 4.8-inch version of the HD Super AMOLED screens seen on other current Samsung devices. It offers a resolution of 720p (720 x 1280 pixels) and a pixel density of 306ppi and is very sharp to the naked eye. The new display uses the much derided PenTile subpixel arrangement, but at these pixel densities the negative effects of the PenTile matrix are difficult to see. Samsung told us that it has improved the gaps in the sub-pixels to make the screen appear sharper than previous HD Super AMOLED displays, and the Galaxy S III's screen looks significantly better than that of the Galaxy Nexus. 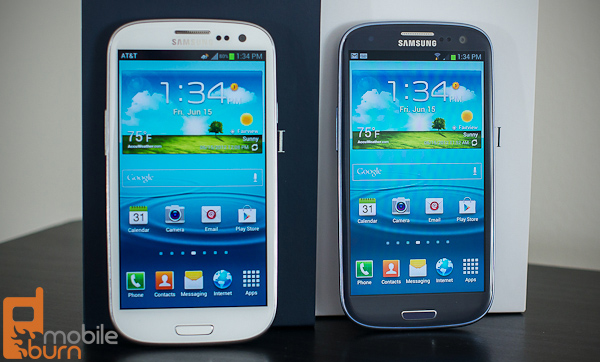 As with other AMOLED screens, the colors on the Galaxy S III's display are very saturated and vibrant – almost as cartoonish. Next to an HTC One X, the Galaxy S III's colors aren't as accurate as the HTC's, and you can notice a blue cast in white areas on the screen. However, if you never compare the two phones side by side, the display on the Galaxy S III is pretty impressive.

It also has tremendous viewing angles, although I found it a little difficult to see the screen in direct sunlight – something that is much easier with the Super LCD2 screens used by HTC.

The light sensors, the earpiece and the 1.9 megapixel front camera are located above the display. To the left of the earbuds there is a hidden multi-colored LED notification light that I was very happy to see. The light pretty much disappears when it's not lit – a pretty cool effect. 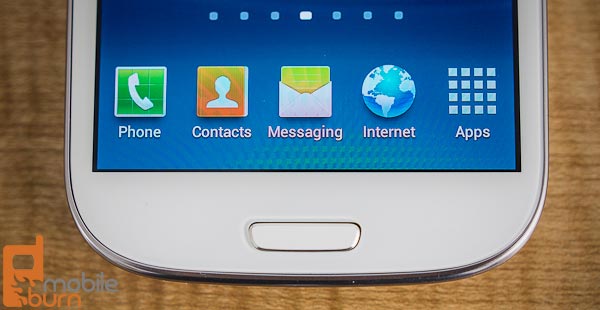 It's interesting to mention Samsung's approach here: despite the fact that the Galaxy S III hits the market with Android 4.0 Ice Cream Sandwich, it essentially uses an Android 2.3 gingerbread button layout and has Google's guidelines on how to use it virtual screen buttons (as) ignored (seen on the Galaxy Nexus). I think this was a good choice as the hardware buttons let the contents fill the full height of the display without wasting valuable screen real estate. Not that the Galaxy S III really lacks screen space, but every little bit helps.

Samsung's button layout is different from HTC's, and there are pros and cons. I prefer HTC's dedicated multitasking button (you have to hold down the home button on the Galaxy S III to access the slightly slower multitasking menu), but I think Samsung was very smart at putting a dedicated menu button on the Deploy Galaxy S III because so many Android apps still require one – despite Google's best intentions. A long press of the menu button on the Galaxy S III also starts a search in any app, which is certainly useful. As for the actual hardware of the buttons, one thing to note is that when the backlight is off, they virtually disappear on the front of the phone and it can be difficult to decipher their exact location when you pick up the device. Fortunately, the buttons are very responsive to touch, and if you just press your finger on either side of the home button, you are probably pressing the capacitive button you are aiming for.

Although the Galaxy S III is made entirely of plastic, the edge has a circumferential silver trim (light blue on the Pebble Blue model) with a faux-brushed metal appearance. I'm not a huge fan of this as I believe that any plastic that tries to improve the appearance of another material usually doesn't, but the trim doesn't interfere with the functionality of the phone and many users probably will have no problem with that.

As is customary with Samsung, the right side of the phone houses the power / sleep / unlock button, while the left side houses the volume rocker. Both switches were solid and easy to spot when you held the phone to your ear. On the top is your standard 3.5mm headphone jack, while the bottom of the Galaxy S III has the micro-USB charging port that doubles as an MHL port for outputting media to an HDTV with the correct adapter is used. 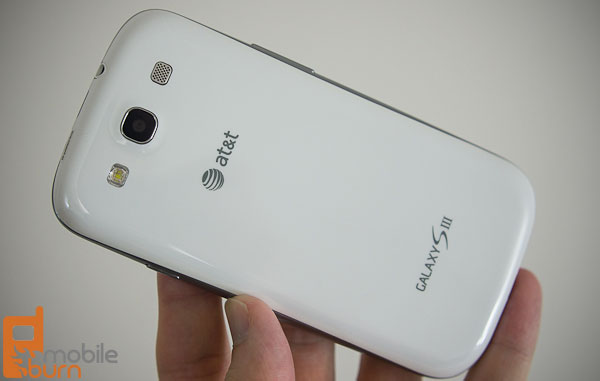 The back of the Galaxy S III is pretty sparse, with just a screen-printed logo for the carrier and Samsung branding. At the top you will find the 8 megapixel camera, LED flash, and the single external speaker. Kudos to Samsung for making the back cover removable as many phones in the market today do not allow users to remove the back cover at all. Below you have access to the 2100 mAh battery, the micro SIM slot and the micro SD card slot for storage expansion. The large battery is user-replaceable, which should make power users very happy.

All in all, the Galaxy S III is a very well put together and smartly designed phone. The only real discomfort I have with it is the plastic feel and the exceptionally shiny finish. While it's just as solidly built as most other smartphones on the market, it doesn't have the same feel of quality as an HTC One X or an Apple iPhone 4S. But the Galaxy S III is just the thing for pure functionality.

Last year, Samsung consolidated its position as the leading manufacturer of Android smartphones with the Galaxy S II. The massive success of this phone has helped make Samsung the largest cell phone manufacturer in the world. However, things are different from last year as HTC has woken up from its […]