The Motorola Atrix HD is the continuation of last year's smartphones Atrix 4G and Atrix 2 for AT&T. This year the Atrix gets a significantly improved display, a faster processor and a better structure than the older phones.

The 2012 smartphone market is very different from 2011, however, and the Atrix HD has serious competition in the AT&T smartphone lineup with the Samsung Galaxy S III and HTC One X. The Atrix HD has most of the specs on a par with the top Android model of smartphones, but does it pair well enough to be a real competitor?

The answer to this question is a little yes and a little no. The Atrix HD excels in certain areas, but doesn't quite hit the mark in other areas. Fortunately, at $ 99, it's great value, and it's one to consider for those looking to spend no more than $ 200 on a new smartphone.

At first glance, the Motorola Atrix HD looks like it fell from the same tree that the Motorola Droid Razr and Droid Razr MAXX came from. The design of the phone is very similar to Motorola's Verizon flagships, but the corners have been slightly rounded and the overall look of the Atrix HD is a bit softer than that of the DROID RAZRs. Fortunately, Motorola's solid build quality is there and taken into account here, and the Atrix HD is sure to be a well-built device. The seams are all very tight, and although the phone is mostly made of plastic, the plastics used have a soft finish, as opposed to the very glossy finish that Samsung prefers for its smartphones. At 140g, the Atrix HD isn't the lightest phone on the market, and that certainly adds to its solid feel. On the front of the phone is a new 4.5-inch HD ColorBoost TFT LCD display with a resolution of 720 x 1280 pixels. This new display has a pixel layout with RGB strips and a pixel density of 330 PPI and thus exceeds the pixel density of almost all smartphones currently on the market. The result is that images and text are very sharp and it is almost impossible to see individual pixels with the naked eye.

The display itself is bright and the colors are punchy, if a little oversaturated. The viewing angles are excellent and the ColorBoost screen can be used outdoors in direct sunlight. However, it's not quite as good as Nokia’s ClearBlack displays, which set the bar for outdoor visibility. 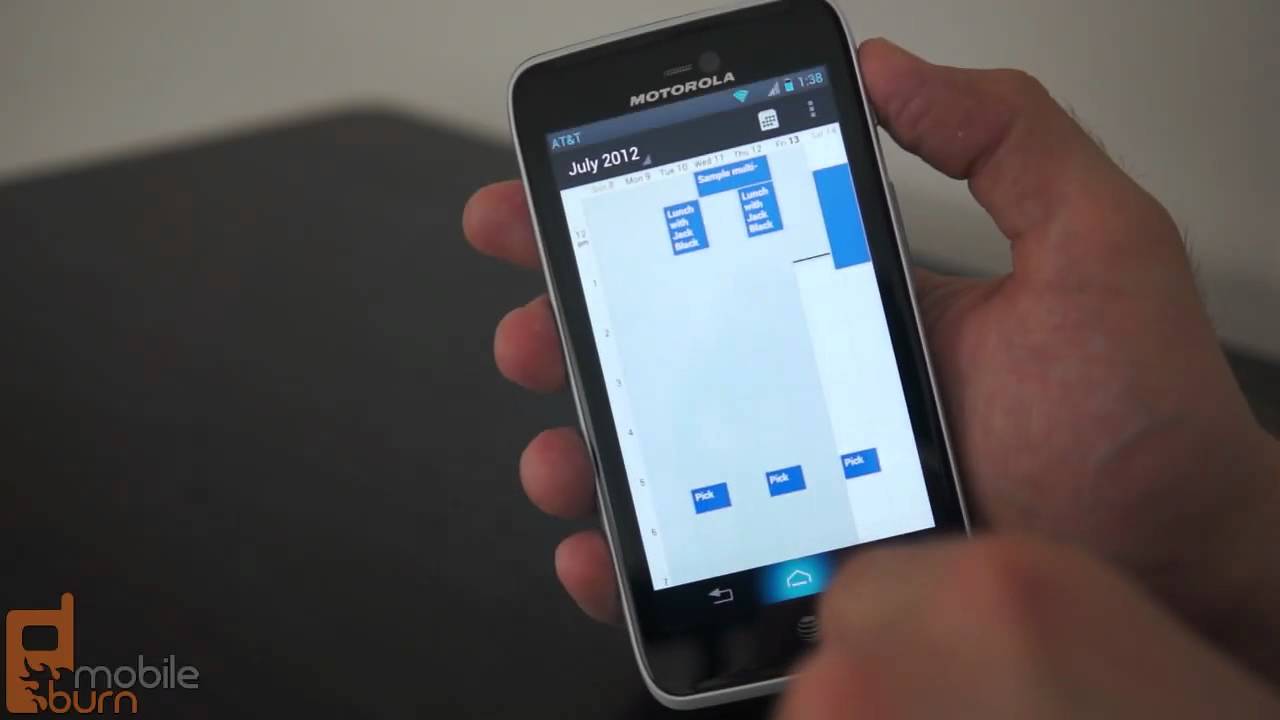 There's a big black border surrounding the screen, and the Atrix HD feels a little wider than it needs to be. At 69.9 mm, the Atrix HD is almost as wide as the Samsung Galaxy S III, which has a larger 4.8-inch display. The bezel surrounding the Atrix's screen is roughly twice that of the Samsung's, and it seems like Motorola could have used a smaller bezel to improve one-handed usability while maintaining the 4.5-inch display .

Above the screen is a practically hidden multi-colored LED notification light next to a rather small earpiece. There is also a 1 megapixel front camera. The only thing under the display is a screen-printed AT&T logo as the Atrix HD doesn't have any capacitive or physical buttons on the front.

Like the RAZR smartphones from Motorola, the Atrix HD is also significantly thin with a thickness of only 8.4 mm. There is a thicker bulge at the top of the phone that houses the camera and external speaker. There is also space for the 3.5 mm headphone jack, the micro USB port and the micro HDMI port. On the right side of the phone is a volume rocker and a power / sleep / unlock button, both of which clicked and responded on my test device. On the left you will find a flap that hides the slots for micro-SIM and microSD cards. This door is really the only part of the Atrix HD that I didn't like as it felt a little weak. Fortunately, it's not something that most users have to deal with very often. The back of the Atrix HD is made of Kevlar fiberboard, which provides strength and rigidity and just feels good in the hand. The panel has a soft-touch finish with a synthetic carbon fiber fabric that is much better than the glossy plastics used on other smartphones. Motorola also notes that the Atrix HD has a water-repellent nano-coating so it can withstand the occasional splash of liquid without any negative effects. The Atrix HD is sealed all around so that users cannot access or replace the 1780 mAh battery inside.

Overall, the Atrix HD offers processing and display quality that you normally don't see on Android devices at this price point. The design may be a bit uninspired, but it's harmless and generally gets the job done.

The Motorola Atrix HD is the continuation of last year's smartphones Atrix 4G and Atrix 2 for AT&T. This year the Atrix gets a significantly improved display, a faster processor and a better structure than the older phones. The 2012 smartphone market is very different from 2011, however, and the […]